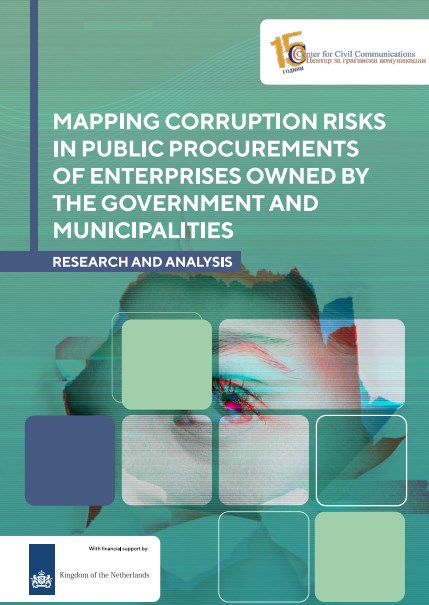 Today, 6 October 2020, the Center for Civil Communications (CCC) releases its research paper “Mapping Corruption Risks in Public Procurements of Enterprises Owned by the Government and Municipalities”.

Corruption risks were mapped as part of in-depth monitoring conducted on tender procedures of 37 joint stock companies and enterprises founded by the Government, the City of Skopje and Municipalities of Kavadarci, Gostivar and Struga. In 2029, these enterprises have signed public procurement contracts in the value of 247 million EUR, accounting for 27% of all public procurements in the country.

Key findings from the analysis:

The research paper Mapping Corruption Risks in Public Procurements of Enterprises Owned by the Government and Municipalities is developed as part of the project “Toward Accountable Public Enterprises” with financial support from the Embassy of the Kingdom of the Netherlands in Skopje, implemented by the Center for Civil Communications in the period 1 October 2019 – 30 September 2021.

Weaknesses detected in the analysis further confirm the need for enhancing integrity and reducing corruption risks at public enterprises and joint stock companies. In that regard, this analysis will be followed by individual screening at all 37 enterprises, including an overview of key parameters that reflect public procurements at the level of individual contracting authorities, as well as human resources and internal policies at targeted enterprises. The purpose is for this screening effort to be used for adjustment of planned workshops and training sessions intended for representatives from public enterprises and joint stock companies and aimed to overcome actual weaknesses in implementation of public procurements, while maximizing effects from capacity-building of human resources and developing individual integrity plans for public procurements. Therefore, the Center for Civil Communications has recently signed letters of intent with the founders of targeted joint stock companies and public enterprises, i.e. the Government of RNM, the City of Skopje and Municipalities of Kavadarci, Gostivar and Struga, wherein it is enlisted that after identification of corruption generators in public procurements of these enterprises, activities will be implemented for setting standards to improve accountability and integrity, and support will be provided for introduction of sustainable mechanisms to advance implementation of public procurements.